Germany, 1957. Attorney General Fritz Bauer receives crucial evidence on the whereabouts of SS-Obersturmbannführer Adolf Eichmann. The lieutenant colonel, responsible for the mass deportation of the Jews, is allegedly hiding in Buenos Aires. 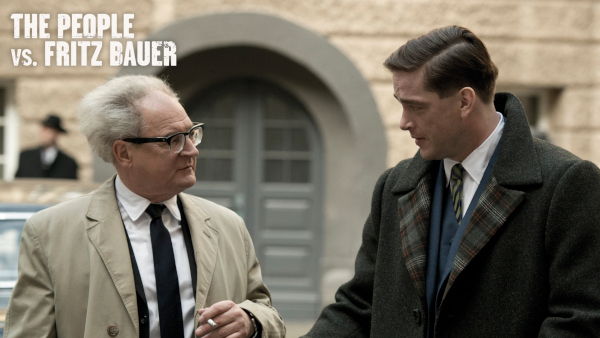 Bauer, himself Jewish, has been trying to take crimes from the Third Reich to court ever since his return from Danish exile. However, with no success so far due to the fierce German determination to repress its sinister past. Because of his distrust in the German justice system, Fritz Bauer contacts the Israeli secret service Mossad, and, by doing so, commits treason. Bauer is not seeking revenge for the Holocaust – he is concerned with the German future.

The significance of Fritz Bauer, attorney general of Hessen, in the formation of the Auschwitz trials in the 1960s is indisputable. However, it didn’t become known until after he died how decisive he was in apprehending Eichmann. Now with his film THE PEOPLE VS. FRITZ BAUER the Grimme award-winner Lars Kraume (THE COMING DAYS) has drawn a powerful and gripping portrait of a courageous man and his battle for truth and justice. Bauer unflinchingly tackled this thorny subject and didn’t shrink from posing uncomfortable questions to the Adenauer administration.

Burghart Klaussner (13 MINUTES, THE WHITE RIBBON) personifies the title character in a congenial manner, down to the finest details in expressions and gestures. Lars Kraume cast the other roles in his suspenseful, dense portrait of the young Federal Republic of Germany with a top quality German ensemble of actors: Ronald Zehrfeld (BARBARA), Sebastian Blomberg (AGE OF CANNIBALS), Lilith Stangenberg (THE LIES OF THE VICTORS), and Jörg Schüttauf (I’VE NEVER BEEN HAPPIER). 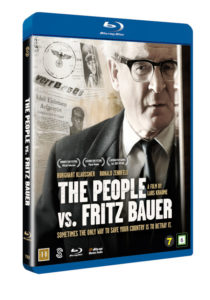 Frankfurt am Main in the year 1957: The attorney general in Hessen, Fritz Bauer (Burghart Klaussner), is found unconscious in his bathtub. An almost empty red wine glass and an almost full bottle of sleeping pills are on the rim of the bathtub. A golden opportunity for the Federal Office of Criminal Investigation officer Paul Gebhardt (Jörg Schüttauf) because he sees his chance to get rid of the obnoxious attorney general. He encourages a police officer to dispose of several other sleeping pills in Bauer’s apartment in order to give the impression Bauer tried to commit suicide and is no longer fit for his position. Gebhardt indicates to the ambitious senior public prosecutor Ulrich Kreidler (Sebastian Blomberg) that one just has to exert a little more pressure to finally bring about Bauer’s downfall.

After he’s released from the hospital, however, Bauer succeeds in quickly calming his concerned boss and fellow party member Georg-August Zinn (Götz Schubert), the minister president of Hessen, and to defuse the rumors of attempted suicide.

Bauer is a thorn in the side of many people, because ever since he returned from exile in Denmark he has been persistently trying to bring the crimes of the Nazi regime to a court of law. It’s a difficult task in a country that for the most part doesn’t want to deal with its past and where numerous central positions in business and politics are still occupied by former National Socialists. Bauer keeps receiving death threats, and he also encounters heavy resistance within his own office: The investigations conducted by the state attorneys assigned to him usually proceed at a sluggish pace and it isn’t the first time that case files have disappeared.

But one day he receives a vital lead in his search for former SS-Obersturmbannführer (Lieutenant Colonel) Adolf Eichmann, who was responsible during the Third Reich for the mass deportation of Jews. A certain Lothar Hermann has written him from Argentina that he has read that Bauer’s office is investigating the Eichmann case, and he has reason to believe Adolf Eichmann is living under a false name in Buenos Aires. Because Hermann’s daughter Silvia has fallen in love with Eichmann’s son Nick. 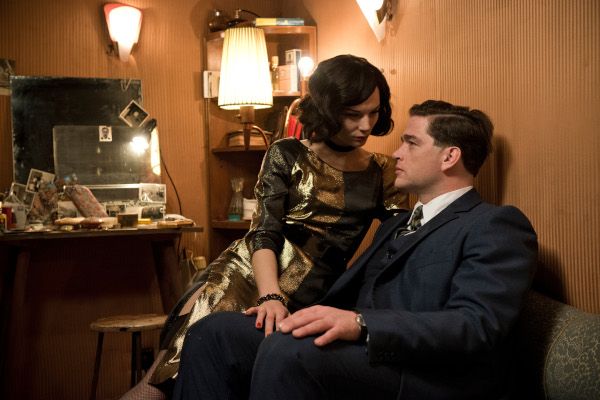 Bauer lets his friend and fellow party member Zinn in on his plans: He wants to bring Eichmann in front of a German court as the central figure in the so-called “final solution.” As all of the German investigative authorities (the Federal Office of Criminal Investigation, the Federal Intelligence Service, and the Federal Office for the Protection of the Constitution) have National Socialists in their ranks and staff members of Interpol answered his request by saying they’re not responsible for political crimes, Bauer plans to get the Israeli intelligence service Mossad involved. Zinn vehemently points out to him that if he does this he will be committing treason and risks serving time in prison.

By means of the request sent to Interpol, Gebhardt at the Federal Office of Criminal Investigation now knows Bauer is following a new lead. He assigns Kreidler to place Bauer under observation – not only to find out who he has his sights set on but also for another reason: Gebhardt shows Kreidler a police report that states while he was in exile in Denmark Bauer apparently had contact with male prostitutes. If he were caught in Germany with a man in such a situation, his career would be over immediately. Because according to Paragraph 175 of the German Civil Code sexual activities between males is illegal.

During lunch in the cafeteria the young public prosecutor Karl Angermann (Ronald Zehrfeld) asks his boss Fritz Bauer for advice in criminal proceedings against a man who was arrested for trying to earn five German marks as a male street prostitute: Angermann is unsure what penalty he should request, because mutual masturbation wouldn’t even be a statutory offense if the Nazis hadn’t made Paragraph 175 stricter. Bauer advises him to request six months, but refers him to the “Valentine Court Ruling” from the District Court of Hamburg in June 1951. In a similar trial back then, two men were not sentenced to prison for repeated sexual activities between two persons of the same sex, but were only sentenced to pay a small fine. During the following hearing Angermann actually does refer to that court ruling and demands a penalty of five German marks, which causes a commotion in the courtroom, and he can’t prevent the accused from receiving a prison sentence of five months. After the sentence is pronounced, a young woman by the name of Victoria (Lilith Stangenberg) approaches Angermann: She introduces herself as a girlfriend of the accused, thanks Angermann for his courageous summation, and invites him to visit her sometime in the “Kokett” bar.

Meanwhile, Bauer flies to Israel and has a meeting with the director of Mossad, Isser Harel (Tilo Werner), who, however, thinks the Argentine lead is a dead-end. According to the information of the Israeli intelligence services the man who Nick Eichmann calls “father” is not Adolf Eichmann, but rather his step-father: Nick’s mother remarried after the war, explains Harel. He adds that Mossad will only continue to pursue the lead to Buenos Aires if Bauer can manage to find a second, independent source who could verify Adolf Eichmann’s identity.

Back in Frankfurt Bauer confides in Angermann by showing him the letter from Lothar Hermann; he tells him about his meeting with Mossad, and asks him for assistance in the search for a second source. Angermann doesn’t want to commit treason and instead would rather get the Federal Intelligence Service involved. But Bauer is convinced the Federal Intelligence Service won’t help them and would most likely warn Eichmann. Because no one in Germany wants to see Eichmann in front of a court – for fear he would name more names during the trial in connection with the “final solution.” Angermann asks Bauer to give him time to think the matter over; however, after seeing Fritz Bauer’s inspiring appearance on German television in the broadcast “Heute Abend Kellerklub” he decides to help Bauer in his search for a second source. He suggests they contact the journalist Friedrich Morlach (Paulus Manker). They may not be able to rule out that he also doesn’t work for the Federal Intelligence Service or for the Stasi, the East German secret police, but at any rate he’s a good informant – and above all, he can be bought. After Bauer is willing to take the risk, Angermann secretly meets with Morlach in his VW Beetle and puts him on the trail of Eichmann.

Although Bauer receives a lot of positive reactions to his television appearance, he also receives almost two dozen anonymous threatening letters. When he asks the Federal Office of Criminal Investigation to investigate and find those who wrote the letters, Gebhardt suggests Bauer could have written these threatening letters himself. Then out of the blue he reveals to Bauer they have reliable clues that in the meantime Adolf Eichmann is living in Kuwait. Bauer, who never mentioned the name Eichmann to Gebhardt, now worries that his plan has been found out and Morlach has betrayed him.

But that’s not the case at all – in fact, Morlach brings good news with him. He’s discovered that a former war correspondent has been conducting interviews for years with Adolf Eichmann in Buenos Aires, because he wants to write Eichmann’s memoirs. Morlach has brought one of the interview tapes with him as proof – and indeed, Adolf Eichmann’s voice is on the tape. Bauer suspects Eichmann is working in Buenos Aires for Mercedes. In order to check this out he drives to the Mercedes-Benz company headquarters in Stuttgart, where he storms into the personnel department and into the office of Herr Schneider, a former commander of a SS task force. He confronts him with the files of his investigation and in so doing he uses blackmail to get the information that Eichmann is working under the alias Ricardo Klement in the Mercedes branch office in Argentina.

One evening Angermann wanders into “Kokett,” where he sees Victoria again, who works there as a singer. After her performance he visits her in her dressing room, but he flees when she tries to seduce him. But a few days later he’s drawn back to her again. This time he takes a bottle of champagne with him into the dressing room. Lying on her chaise lounge, Victoria opens her negligée and reveals her manliness. Angermann dares to kiss her passionately and in the end he succumbs to his forbidden passion.

In the meantime, Fritz Bauer prepares for his second trip to Israel; Gebhardt’s and Kreidler’s agents are constantly shadowing him, speculating that they will possibly be able to prove Bauer committed treason. At the Ministry of Justice in Tel Aviv Bauer has a meeting with the Israeli attorney general Chaim Cohn (Dani Levy) and with Isser Harel. He explains to them that a second source has confirmed the identity of Adolf Eichmann in Argentina; he arranges for Mossad to now get involved in the case, and he vehemently argues that Eichmann should be put on trial in Frankfurt in order to confront the Germans with their past.

To give his enemies a false sense of security, after he returns to Germany he announces during a press conference that he has sent an extradition request to Kuwait, because he has learned from the Federal Office of Criminal Investigation that Adolf Eichmann is living there. And indeed, shortly afterwards several Mossad operatives succeed in overcoming and kidnapping Eichmann in a cloak-and-dagger operation on a dimly lit country road in Argentina.

After Angermann and Bauer celebrate the arrest of Eichmann over glasses of apple wine in a bar, Angermann makes a detour and stops in at “Kokett.” This time, however, Gebhardt surprises him in Victoria’s dressing room, and he confronts Angermann with compromising photographs of him in explicit situations with Victoria. Gebhardt gives Angermann two choices: Either he accuses Fritz Bauer of treason or he will have to go to prison himself.