What does the built environment of Africa look like beyond slum huts or safari lodges? What characterizes the building activity on the continent and its rapidly growing cities? Which challenges and actors determine the architecture of the sub-Saharan region? The editors of the Architectural Guide Sub-Saharan Africa, Philipp Meuser and Adil Dalbai, provide answers and offer insights into the process of creating the seven-volume publication.

Despite the growing interest in Africa, the continent’s built environment is still largely unfamiliar in many parts of the world. The seven volumes of the Sub-Saharan Africa Architectural Guide form the first comprehensive overview of architecture south of the Sahara that does justice to the region’s wealth of buildings. In 49 chapters, each focusing on one country, richly illustrated texts by more than 350 authors from Africa and across the globe come together to produce a superlative work.

On the basis of 850 selected buildings and over 200 thematic articles, the continent’s building culture is elucidated and contextualised. The diverse contributions paint a multifaceted picture of Africa’s architecture in the twenty-first century, a discipline shaped by traditional and colonial roots as well as today’s global interconnections and challenges. An introductory volume on the history and theory of African architecture provides essential background knowledge.

Seven volumes in a slipcase: 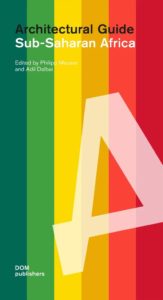